“I look at the houses as the train rolls past and imagine what the lives are like for the people who live there. I wonder if they’re happy…think about what their day might have been like or what they’re having for dinner,” the young Amish woman sitting next to me on the train said.

We were riding Amtrak’s Cardinal train from Huntington, West Virginia, to Charleston.

Riding the train is like that. It gives you a glimpse into the lives of fellow travelers, plus a window-view into the backyards of America where we can only ponder what life might be like. I’ve often caught myself having similar thoughts as this young woman taking the train to visit her mother near New York.

But there’s one other intimacy with train travel. Not only do you get close to (literally) your fellow travelers and take a voyeuristic journey through the landscape, but you detrain right in the heart of the area you visit, allowing you to immerse yourself in a community at its hub.

West Virginia offers up a bounty of such intimacy. There’s the sweet beauty of the Appalachian Mountains, a quiet resilience to its people, and a chance to visit the past while watching its residents move surely to the future.

Amtrak’s Cardinal train runs three times a week from Chicago’s Union Station to New York’s Penn Station. The route through West Virginia is idyllic for the devoted train traveler because the stops are during daylight hours. Stations where the trains arrive or depart in the middle of the night can be rough–loss of sleep, inconvenient hours, deserted train stations–but you won’t find those obstacles at the stops in West Virginia.

I departed Chicago’s Union Station at 5:45 p.m. and woke to an early-morning arrival in Huntington. It’s a small station and I had a hard time at first finding a taxi or Uber at that early hour. I was staying at the Holiday Inn & Suites Downtown, just a short distance from the station, so I called them to arrange a shuttle.

Since I hadn’t stayed in a sleeper car on the train and opted for coach class instead, I was hungry and eager for a shower. The breakfast buffet at the hotel, followed by a shower and a nap got my visit started on a positive note.

The hotel is centrally located so I set off on foot to explore the downtown area. Home to Marshall University and the 2006 film, We Are Marshall, the team spirit is evident in stores and restaurants throughout downtown Huntington. Dinner on my first night was at Marshall Café, sitting at a patio table people-watching. I enjoyed a cup of lobster bisque with a steak salad and a Wild Trail Pale Ale from a West Virginia brewery, Greenbrier Valley Brewing Co. 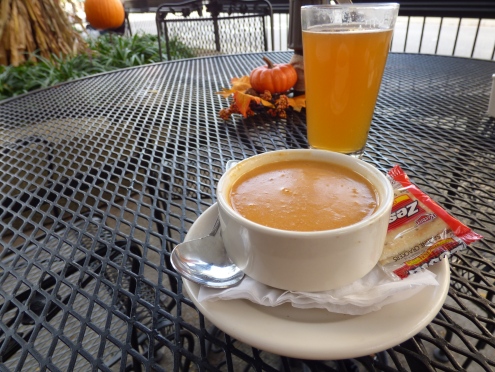 Just a few blocks from the hotel I found Pullman Square, a lifestyle center developed as part of the downtown revitalization. Across the street, I discovered the walking trails along the Ohio River at Harris Riverfront Park. And just a few more blocks took me to Heritage Station, a former Baltimore & Ohio Railroad passenger station that is now a shopping mall with eclectic shops.

The night before I departed Huntington I dined at Backyard Pizza and Raw Bar, perhaps my favorite meal there. Partly because of the charming server who, when he heard I was planning to visit the Greenbrier Resort, sat with me for a bit and dramatically described the enormity of the grandeur and the flourish of the décor there. But mostly, it was the quality of the food. I had planned to order more than I could eat so I would have cold pizza to take on the train with me the next day when I departed for Charleston.

I started with the Field Green Salad, a heavenly combination of mixed baby greens, toasted walnuts, Chevre cheese, and cucumbers, topped with their wildflower blackberry vinaigrette. The salad was a close second to my favorite salad of all time served at The Shed in Santa Fe, New Mexico. For some reason, I crave salads while traveling and this one did not disappoint. The Greek pizza was a delightfully thin, yet airy, crust topped with fresh ingredients.

A short Uber ride took me to explore The Wild Ramp, a nonprofit market made up of producers throughout the area. I discussed the namesake, the wild ramp, with the manager. Our conversation led me to a search for this elusive wild delicacy that is foraged for in the spring. Like the morel, perhaps the short growing season and the illusiveness of the plant, create an even greater love for this fragrant wild leek that tastes like a cross between garlic and onion. Considered the holy grail of wild edibles, I knew I had to get a taste (which I eventually found at a wild game dinner in White Sulphur Springs).

As the sun rose gently, I prepared to depart Huntington for Charleston.

Go here to watch a video of the train pulling into Huntington Station.

“Well you have a long ride this morning,” the conductor smiled and said when he scanned my ticket. Just over an hour, it’s a brief but enjoyable ride from Huntington to Charleston. I arrived at the Charleston station that overlooks the Kanawha River with cityscape views of the downtown area.

It was also a quick Uber ride across the bridge to downtown Charleston and a beautiful room at Four Points by Sheraton. From there I explored parts of downtown Charleston including Taylor Books, an institution in the area that houses a unique bookstore, coffee shop, art gallery, and an underground cinema. I could have stayed all day but there was more to see and do. 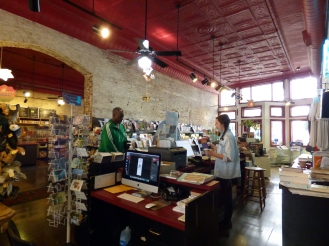 After some shopping, my guide, Jama, took me back across the river to the South Hills Market & Café where I dined on the most succulent mushroom soup and a Southwest salad. While there I got the opportunity to interview the chef, Rich Arbaugh, and bartender, Howard White.

Howard White gets creative with ice.

That evening, I got the chance to visit the Capitol Market for their annual fundraiser and mixer. I sampled food, explored the vast indoor and outdoor market set in an old train station, listened to music, and enjoyed meeting local folk and hearing their stories.

The next day I toured the J.Q. Dickinson Salt Works, where a seventh-generation salt-making family harvests all-natural salt by hand from an ancient ocean trapped below the Appalachian Mountains of the Kanawha Valley. 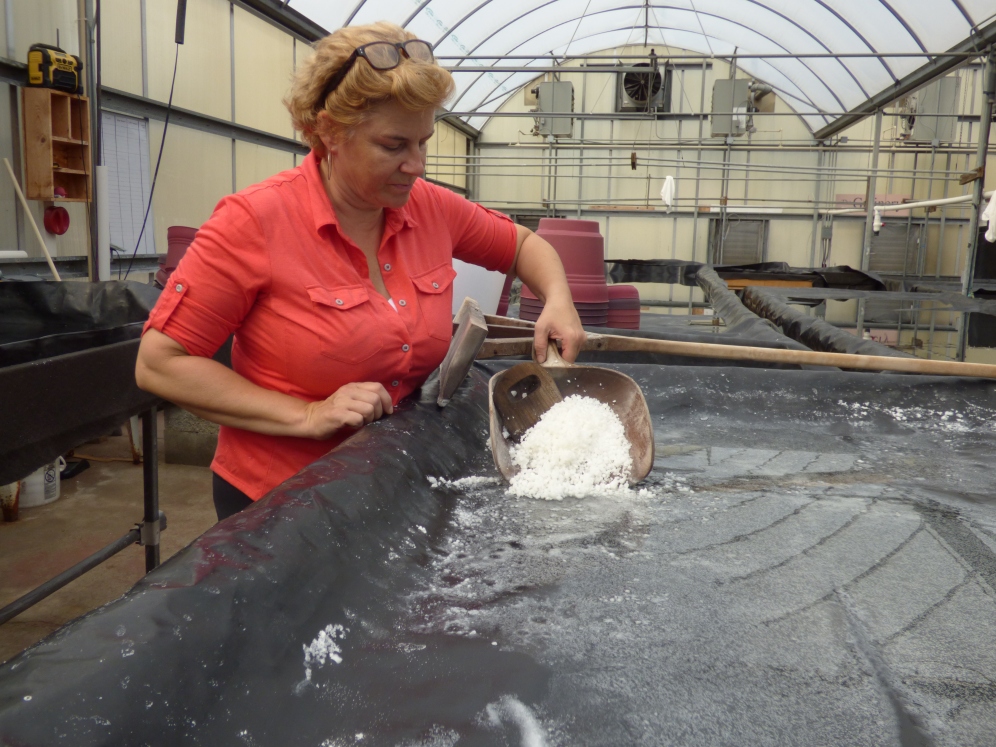 In the afternoon, I took a tour of the Capitol building and the West Virginia State Museum.

After a busy day exploring Charleston, I took a couple hours to rest before I was picked up for appetizers and drinks at Bricks & Barrels, followed by dinner at Bluegrass Kitchen.

You can watch a short clip of the view from the train here.

The train was late but I arrived in White Sulphur Springs early afternoon. Kara, my guide, picked me up at the train station and drove me to Lewisburg, about 10 minutes from White Sulphur Springs. First stop was lunch at Food & Friends where I had a vibrant, fresh salad and chowder.

After a lovely lunch, I checked into Maison Marcel, a charming manor house on three-and-a-half acres. The Owners, Arthur Forgette and Debbie Porter (who are just as charming as the home), also own The French Goat, where I would dine later that night. This gorgeous 1920’s home features two luxury guest suites and beautiful common areas for relaxing. A petit déjeuner (small breakfast) is served daily in the sunny breakfast room.

The majestic home was decorated by Carleton Varney (protege of Dorothy Draper) and Dickie Chilton, who is one of America’s best-known interior designers and is responsible for the restoration and decoration of many hotels throughout the world including The Greenbrier Resort in White Sulphur Springs, West Virginia.

After unpacking and freshening up from the train ride, Kara and I headed to the French Goat for dinner where we enjoyed French Onion Soup and Steak Frites, a charbroiled flat iron steak with divina tomatoes, béarnaise sauce, and truffle frites. The owners, Arthur and Debbie, whether at their restaurant or their bed and breakfast, create an atmosphere of luxury, home, and comfort that is natural and inviting.

The next morning Kara picked me up to explore the two local farmers’ markets. Two markets within blocks of each other offered up local produce, baked goods, homemade items and more. I stocked up on several kinds of cheeses, fresh bagels, and apples (three varieties) for the train ride the next day.

For lunch, we stopped at the Stardust Café where they serve up high-quality food and great service in a casual atmosphere. This trip brought some of the best salads I’ve tasted and the Caper Berry Trout Salad with smoked local trout, roasted tomatoes, giant caper berries on a bed of organic greens with pomegranate vinaigrette was no exception. After lunch, we walked for a bit, exploring the shops in downtown Lewisburg. Although a small city at about 4,000 residents, the downtown area is vibrant and cheery with boutique shops, live theatre, local dining, and live music.

Then it was time to check into the Greenbrier Resort, a National Historic Landmark and world-class resort that has been welcoming guests from around the world since 1778. The natural mineral springs drew the first guests over 235 years ago and still invite guests including 26 Presidents to this 11,000-acre luxury retreat. The property boasts 710 rooms, including 33 suites and 96 guest and estate homes. The Greenbrier has 10 lobbies, so I admit it took some time to get my bearings for getting around this massive property.

After a first-class dinner of linguine with shrimp and crab at The Forum (there are six restaurants on site), I spent the evening shopping and then relaxing in the healing waters at the pool. The next morning brought a spa treatment with a much-needed massage. Unfortunately, it was raining before I departed so I wasn’t able to walk the grounds, but I plan to return someday for more than one night to truly experience this magnificent resort.

As I boarded the train to depart West Virginia, I thought about the people I had met during my trip, the sweet beauty of the mountain scenery, the glimpse into West Virginia life I saw for a brief time… and I felt grateful for the opportunity to experience what life is like in, according to John Denver, “almost heaven.”