Kyle Claypool and Michael Stuckey from Lifted Spirits Distillery in Kansas City have a vision. They aim to combine a passion for excellence with using scientific methods to create a better product and do it all using locally sourced grains. Their mission: “We believe the best things are born out of a passion for doing things well, for the right reasons. For us, that means working with local farms to grow the perfect grain, then blending the best distilling traditions with the latest science to make the best spirits we can.”

So a trio consisting of Kyle Claypool as president, Michael Stuckey as head distiller, and Jason Dowd as mixologist formed to marry traditional distilling methods with modern science.

A friend of Claypool’s has a farm in nearby Wellsville, KS. The farmer is also a brewer with a degree in grain and milling science. Claypool says he visited his friend, told him the sort of flavor, richness, and depth he wanted, plus the types of products. He and Stuckey spent hours working to find exactly the right strand of soft red wheats for what they wanted to do.

The Science of Distilling

Claypool explains the desire for Lifted Spirits Distillery to have a scientific edge: “Science involves looking at the history and tradition of traditional distilling, and then doing some experimentation to see when history (the historical process of distilling) is the right path and when not.”

For example, Whiskey is traditionally aged except for American-style Whiskey. Traditional thought follows that you should place the barrels in a non-climate-controlled space to get rising and falling temperatures. “Tradition says that leads to a better aging experience,” Claypool says, “believing that the variance of temperatures pulls the spirit of the oak into the wood more.” 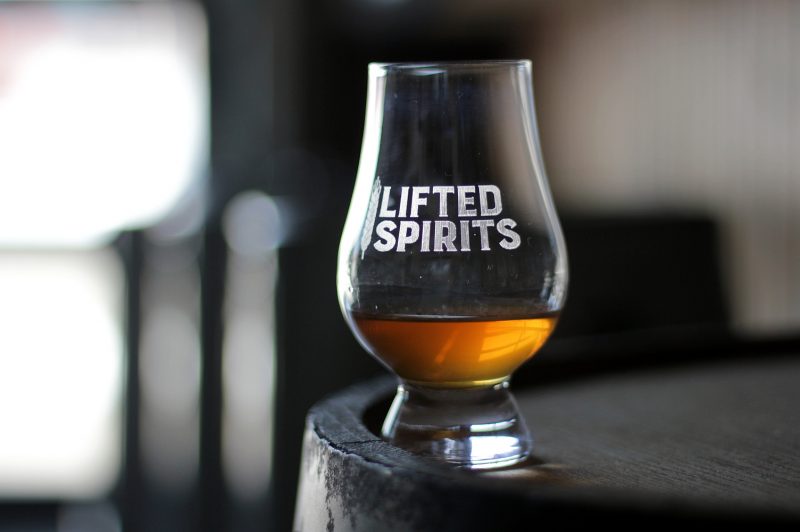 However, Claypool researched scientific studies and found the opposite results than traditionally believed about this method. “There’s a guy who did some scientific experiments on that [the variance of temperatures] and found that the really good, important stuff in a barrel—the chemical reaction, the bonding with molecules—happens better when temperature and humidity are controlled over the lifespan of Whiskey aging.”

“This contradicts common understanding and a lot of distilleries go out of their way to make sure the Whiskey is not climate controlled, but we are going the other way because scientific data shows otherwise,” Claypool says.

Another area Lifted Spirits Distillery strays from the norm is their use of barrels. Traditionally, Whiskey is aged in barrels made from kiln-dried wood. Claypool says that experimental data led them to use air-dried oak, normally reserved for wine, instead.

The idea for the distillery spawned out of a hobby the three men had with their wives. Once a week the group would gather to play board games, during which they would buy different spirits to sample. This led now-head distiller Michael Stuckey to a desire to make his own spirits. “(Stuckey) found and read some distillation text from 1800s France. There was a lot of information about Absinthe, which lead him to get passionate about it, and experimenting with distilling,” Claypool says. Stuckey began bringing mason jars to game night. As the hobby and passion grew, the trio visited different distilleries and started touring and experimenting.

Another reason their interest grew was from spending time studying under distillers. They fell in love with the history and traditions. For example, Claypool says that originally farmers would bring their extra crops to the still and families would gather around while it distilled. That slower pace and sense of community have changed, but Claypool says they wanted to do something about it—so they created a full-service bar and tasting room to reignite that sense of community.

Their first Gin, Bright Gin, is a bright, crisp, accessible spirit that appeals to both the Gin newcomer and the longtime Gin aficionado. It’s made by vapor-distilling 10 different botanicals including chamomile, cardamom, hibiscus, elderberries, and orange peel. It’s juniper-forward, but without the intense pine-tree taste that overwhelms the other flavors in many Gins. In Bright Gin, you’ll find a beautiful floral aroma with a sweet, balanced flavor and rich mouthfeel. Their next Gin, due later this year, will be a bolder, spicier, Gin-lovers Gin.

Lifted Spirits Vodka is made from a soft red wheat grown by farmers less than an hour from Kansas City. This wonderfully smooth Vodka has a rich body and mouthfeel that makes this a Vodka you can sip or use in your favorite cocktail or infusion.

Try any of their spirits at their full bar with a cocktail program as well as beer on tap. Or try a tasting flight of their products.

A unique cocktail served at the bar is the Wild East, comprised of a jalapeño shrub, lime juice, simple syrup, and Lifted Spirits Vodka. The glass is smoked over hickory chips for a resulting drink that has a spicy note but is mellowed by the sweetness of the lime, plus a savory smoky flavor. Claypool says of the cocktail, “Inspired by the artists at Vulpes Bastille, the Wild East is a celebration of the East Crossroads area in Kansas City. Bold, unconventional, wild, but beautiful and surprisingly approachable. Don’t let the jalapeño scare you off—the heat is balanced nicely by the citrus.”

One of their most popular cocktails, Claypool shares the recipe here

One of their most popular cocktails, Claypool shares the recipe here.

Instructions: First create the Jalepeño Shrub and Rich Syrup (instructions following the recipe), then follow the directions below to put it all together:

1. Prep the Jalapeño Shrub. (Needs to be done at least 24 hours in advance.)

2. Prep the Rich Syrup. (Needs to be enough in advance to allow it to cool.)

3. Smoke your glass by lighting the cherry wood chips with a small torch and covering the flame with your glass. It’s easier than it sounds!

4. Add all liquid ingredients to a shaker and fill with ice…then shake.

5. Lift your glass off the wood chips and add fresh ice before straining your cocktail into the smoked glass.

6. Garnish with a torched jalapeño slice.

1. Add sugar and chopped jalapeños (with seeds, unless you don’t like spice) to a jar.

2. Combine (stirring or shaking) until they are well mixed.

3. Store the jar in the fridge for 3–4 days, shaking or stirring it every day, until the sugar is totally dissolved. (You can remove some of the syrup earlier, if necessary.)

4. Strain out the jalapeños.

5. Measure the remaining syrup, and add an equal amount of vinegar to the syrup. Shake until well mixed. Refrigerate. (Because of the vinegar, shrubs can last indefinitely in the fridge.)

1. Bring water to a boil, and turn down to a simmer.

2. Add in sugar and stir until it dissolves.

3. Pour into a mason jar and store in refrigerator. (Can last for up to 6 months if stored properly in an airtight container. Syrups, however, will eventually get moldy, so check on it regularly.)