Many a successful business originated from a passion project. So what happens when you have two passions—that don’t necessarily seem like they go together—like drinking and history? In the case of Liz Garibay, you create History on Tap. Garibay blended her love for the camaraderie of drinking in intimate bar settings with her background in history to create authentic tours focused on seeing history through the lens of alcohol.

Founder of History on Tap, Garibay says she originally studied archeology but found it exhausting. She loves chatting with people and says archeology, where you’re often in a hole by yourself, didn’t fit with her lifestyle. So she shifted to urban history with a specialty in 19th-century American urban development. While making the shift, Garibay realized Chicago, filled with history, was the perfect place to begin. 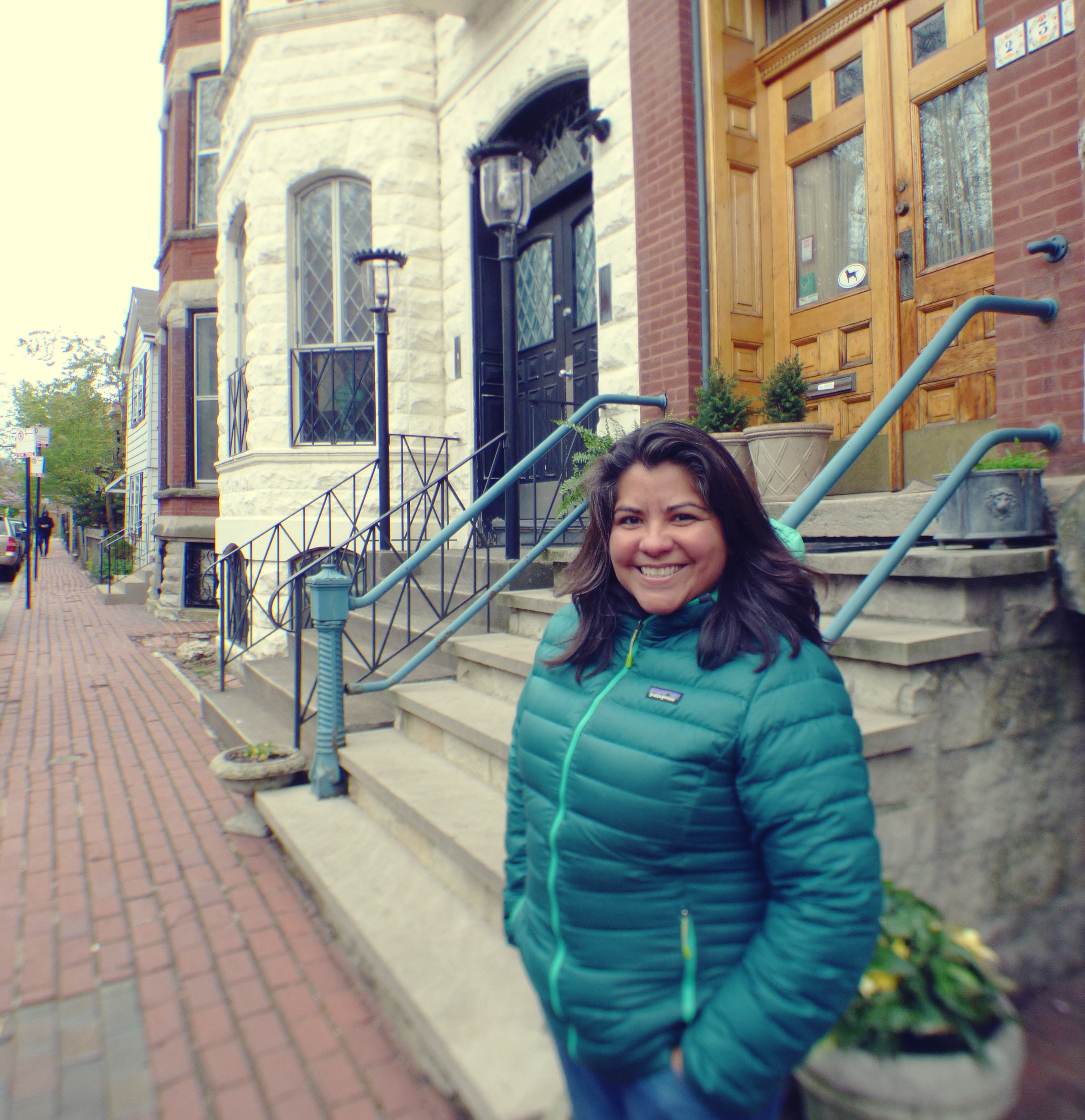 History by itself can be hard to swallow; people can be blocked by all the facts and figures, names, and numbers, and “…it can be really boring,” she says. The transition to creating a tour where participants can drink and learn about history evolved from her personal preferences. “So…I like to drink,” she says with a chuckle. “Drinking makes everything easier, so I decided to look at history through the lens of alcohol.” The tours offer a way for Garibay to combine her love for pubs, history, and her native Chicago.

Garibay explains, “If I’m in a brewery or bar or other alcohol-making places, and telling you some history while you’re drinking, it’s a lot more fun (than sitting in a classroom). People can digest it a little easier. And, the fact of the matter is that human beings have pretty much been drinking since we could walk. Our country…I always talk about the patriots being a bunch of drunk idiots. These patriots were throwing back Rum and Cider, getting fired up, and planning the Revolution. In Chicago, the same thing happens—the city was built on alcohol. So I teach modern history-making parallels to alcohol.”

Her tours fill a niche and Garibay offers her wealth of historical research to participants. “I believe that taverns, beer history, and drinking culture are useful and familiar tools to teach diverse audiences about a city’s past. For nearly two decades, I’ve been researching records, collecting oral histories, and collaborating with experts in order to provide factual, historical information to anyone wanting to learn about history in a fun and social way.”

I was in Chicago for a few days for a travel writer’s symposium. When the chance opened up to take one of Garibay’s tours, I was thrilled. At the writing forum, the discussion was about authentic travel and the desire of travelers to get away from the traditional tourist spots and immerse themselves more in the authentic aspects of a city. Garibay’s tour was the perfect lesson.

Our lesson in history on tap included visits to three iconic bars located in Old Town, Chicago. Each bar had a different vibe. Garibay explains that her bar choices are made on purpose because “you have to have a diverse cast of characters to tell a story.”

At each bar, we would enjoy a cocktail while Garibay told the history of the bar we were visiting. In between bars, we would walk through Old Town and hear stories about the Chicago Fire, Second City, the original settlers, and other historical aspects of the area. Although she has created more than 150 different tours, the Old Town tour is one of her favorites (and customer’s favorites) because the area is layered in history.

We met at Twin Anchors for the start of the tour.

“Prohibition is a huge part of the history of our city. People want it; they ask for it, they crave it. Nearly every bar in Chicago will tell you that they were formerly a speakeasy, an illegal establishment. And they say that because there’s cachet in it. But it’s not easy to find out what was what and who was who because no one was keeping records then—they were trying to keep it all under the table. So, you can’t believe everything you hear. However, some documentation verifies certain places were speakeasies. I’m happy to tell you that you’re sitting in one.” 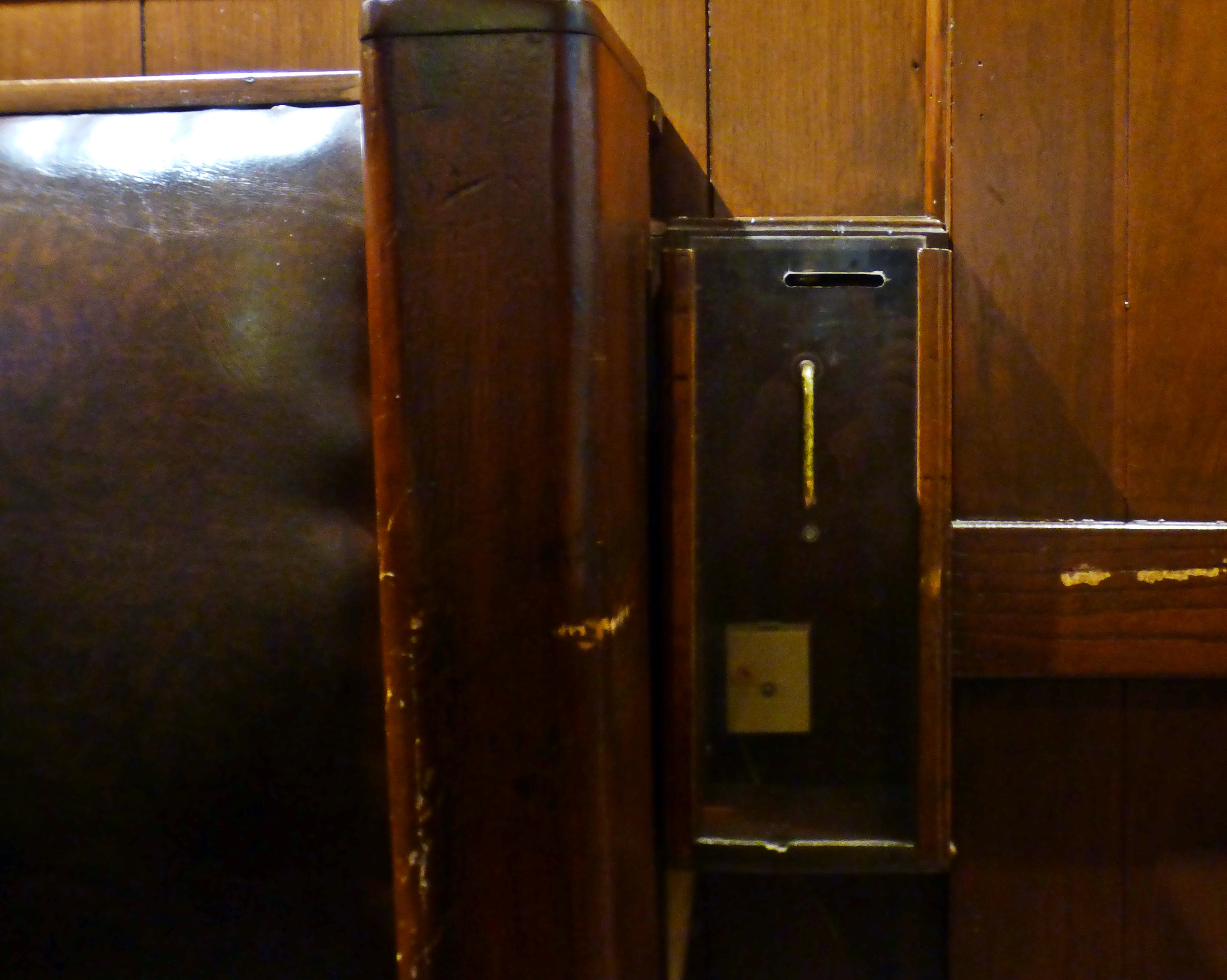 Prohibition history abounds at Twin Anchors. We heard fascinating stories about the origination of their famous ribs. We saw the telephone that Frank Sinatra had installed at the booth he sat in whenever he visited (and kept locked when he wasn’t there). When Sinatra was traveling, they would ship their ribs and coleslaw to him. In addition to many more stories, we learned why there was a sign posted that read “Positively No Dancing!” Apparently, dancers would bump the servers carrying plates of ribs, causing them to spill, so they enforced the rule of no dancing.

We could have spent the entire evening at Twin Anchors, but it was time for a walk through the residential area of Old Town. 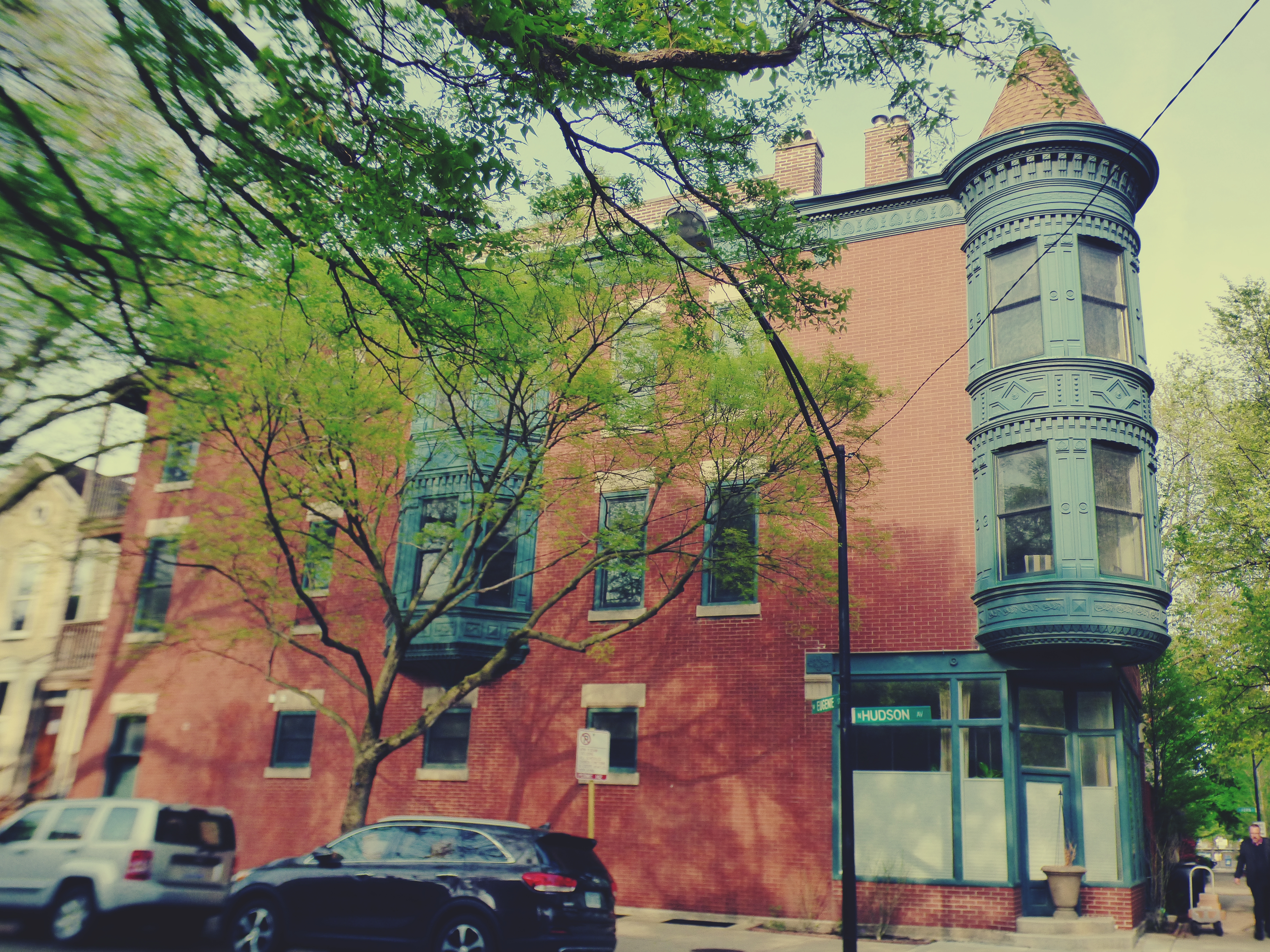 Chicago became an official city in 1837. The area of Old Town is where the first German settlers came. With maybe 150 residents in 1837, the area slowly began to grow. “The German immigrants came in the ’20s and ’30s, followed by an Irish presence in the ’40s, mostly because they were fleeing the potato famine, and then you started getting everyone else,” Garibay says. The city continued to grow in the ’50s and ’60s, followed by the Chicago Fire in the ’70s. Then in the ’80s and ’90s, the population continued to explode in the area.

The residential part of the tour had Garibay telling about the Chicago Fire (and some funny speculations to its cause), the architecture of the time, the diversity of German architecture across the street from a Buddhist Temple, a visit to St. Michael’s Church, and more. It was an interesting lesson in the efforts made to preserve the heritage of the area—but we were thirsty for a drink at our next bar. 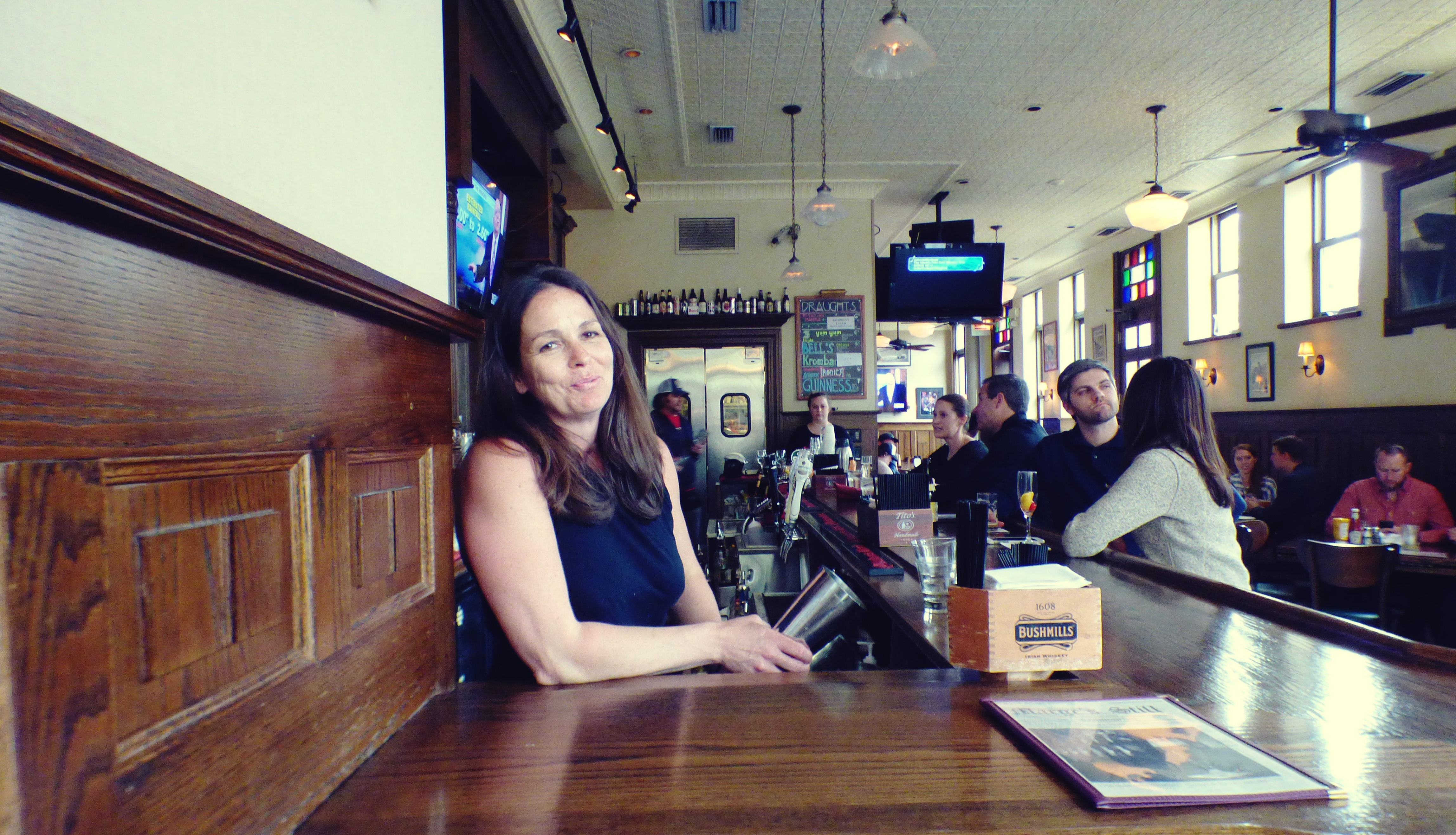 Another speakeasy during Prohibition, Marge’s Still had numerous bathtubs upstairs making bathtub Gin that was sold in the cellar. The location has changed with the times and is now a restaurant offering bar fare as well as bistro entrees. A picture of Marge still hangs on the wall. The only item remaining from its days as a speakeasy is the antique wooden bar. 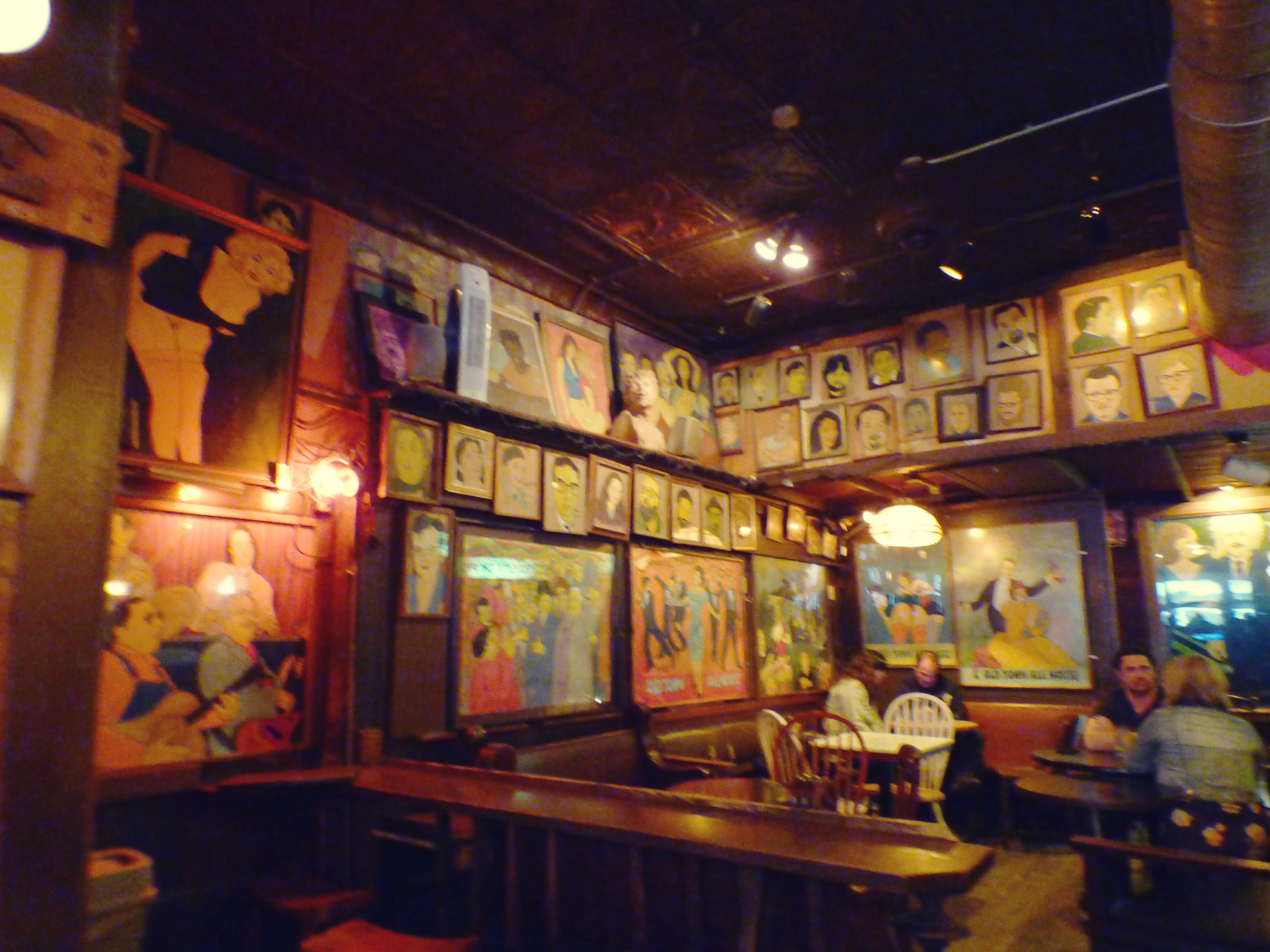 After a drink at Marge’s Still, we took off walking the business area of Old Town, seeing landmarks like Second City improv theater and the various restaurants and bars that line the streets. Then it was time for our final drink of the tour. At Old Town Ale House, a cash-only dive bar, the walls are filled with drawings of past and present patrons. It’s a celebrity hot spot and the walls aren’t the only place you might catch a celebrity sighting. Garibay is on the wall, too.

If Liz’s passion for history and spirits is any indication of success, she’s well on her way with her History on Tap tours.

Learn more about the variety of History on Tap tours, read Garibay’s blog, or find out about the country’s first beer museum, The Chicago Brewseum, that Garibay is building, at http://www.historyontap.com.