West Palm Beach is one of the lesser-known of the three cities in the South Florida metropolitan area. Miami, is, well, Miami, and Fort Lauderdale has beaches and boats. West Palm Beach is a nice middle ground, with all the attractions of city life while also being home to a more down-to-earth community. Those of us who love it call it the best of both worlds.

West Palm Beach is known as a big “little” city. The population is about 100,000 people, putting it among the ranks of Hartford, Connecticut and Santa Barbara, California. Still, between this city and Miami, there are five million people, so it definitely doesn’t feel like a ghost town. Palm Beach County in general also sees nearly six million visitors each year.

I recently had the opportunity to scout a job in West Palm Beach. Here’s what I discovered, and my research on the area in case I choose to move there.

For one, the city has an impressive job market. In fact, Palm Beach County announced last year the employment rate was at the lowest it’s been in a decade at 3.9 percent. It certainly helps that the state has no income tax, making those who live here the envy among friends who live outside of Florida. The city is friendly to people interested in starting their own business. There are several nonprofits in the area that provide office spaces and networking opportunities.

Most people get around West Palm Beach by car. There are two options for public transportation: The Palm Tran and Molly’s Trolleys. The Palm Tran has more than 3,500 bus stops, and fares run $2 for a single trip. Molly’s Trolley is free and it circles the Downtown area. The flat terrain makes the city very bikeable, and there are several shops in the area that offer bicycle rentals.

Flamingo Parks is where business owners and other professionals live among Mediterranean or Mission-style homes from the 1920s and stucco bungalows. This neighborhood is right between the U.S. 1 and Interstate 95, and it’s less than 10 minutes from the Palm Beach International Airport. Visitors to this neighborhood can check out the Armory Arts Center, which offers 65 different studio art classes.

Cityplace is in the heart of downtown with many popular restaurants and a busy nightlife. The area experienced a recent revitalization and many of the condos and apartment buildings were put up in the last 10 years. This place is great for people who want to ditch their car.

You can easily walk to the Kravis Center for the Performing Arts to catch Broadway or classical music performances, laugh out loud at the nearby Improv Comedy Club and dine at the top-rated City Cellar Wine Bar and Grill. There is a free trolley that takes visitors from Cityplace to Clematis Street, another busy nightlife area. The street runs east to west, and it has more than a dozen bars and restaurants within a three-block area.

Mango Promenade is located south of downtown in the heart of Palm Beach Atlantic University’s campus. The area is less commercial than Cityplace, in that it has a series of smaller shops such as the Serenity Garden Tea House and various consignment clothing stores. The neighborhood is home to the Norton Museum of Art. This museum has Buddhist sculptures and Impressionist paintings among its 7,000 works. Visit this museum soon, as their admission is currently free while they undergo renovations.

Northwest is a historic district with impressive architecture that ranges from Bahamian-style designs to American bungalows. This neighborhood is a primarily residential area. However, it is the current focus of several renovation projects such as the restoration of the famous Sunset Ballroom and Lounge and Jazz Park.

Getting sand between my toes was easily my favorite part of the trip. I ventured out on a sunny afternoon with my beach bag full of jerky, a water bottle, sunscreen, and a good book. Palm Beach County covers 47 miles of the Atlantic Ocean coastline, so it was difficult to pick just one beach. I ended up at Juno Beach one morning so that I could play with pups, and Delray the next day to explore but here are a few of the best beaches I came across in my research.

John D. MacArthur Beach State Park has a shallow reef with plenty of colorful fish, making it an ideal spot for snorkeling. The park also offers kayaking, hiking trails and even live music on the weekend. It’s great for families or for people who want to take quiet walks along the water.

Juno Beach is very dog-friendly, and it’s wide enough that visitors don’t have to worry about getting a good spot in the sand. The beach has designated areas for swimming, surfing, and fishing. It also has a 990-foot pier for ideal Instagram-worthy photos. 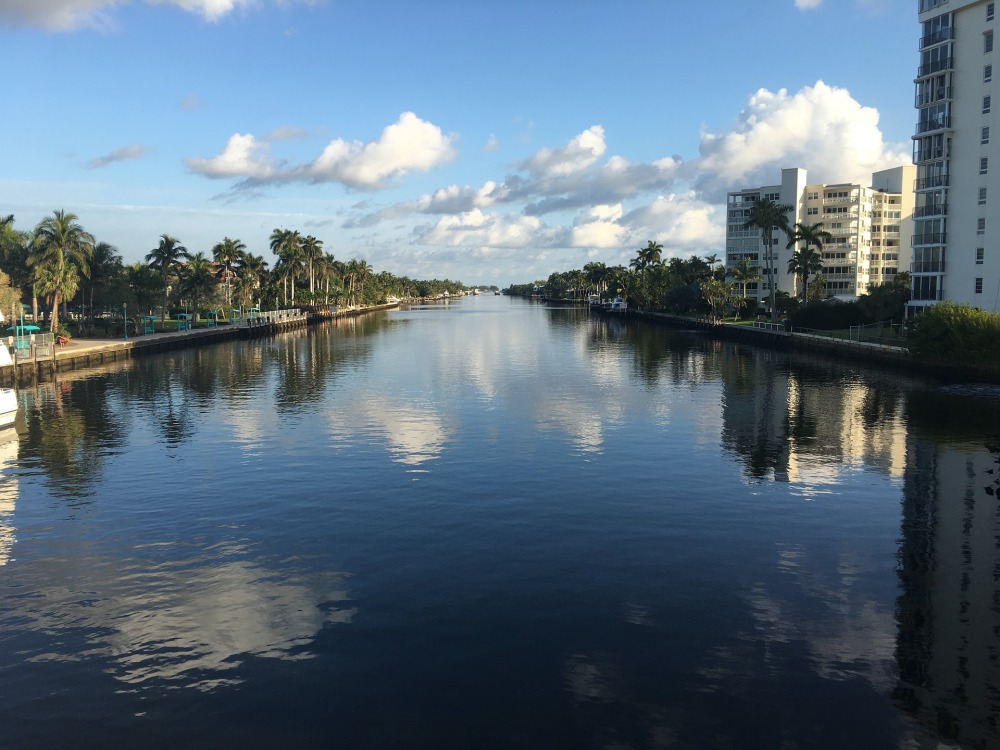 Delray Beach is fun in and out of the water. Walk along downtown to do some window shopping or check out the murals in the Pineapple Grove art district. While I was there, I met up with David of BeachFront Builders to talk about potential house flipping opportunities, which I’m hoping to explore if I move to the area. There are great restaurants for grabbing a bite, and an active nightlife for grabbing something to drink at the end of the day.

Someone wanting a little more peace and quiet will like the nearby West Delray Regional Park. This park has more than 300 acres of open land and water, including bike trails, camping areas and a runway for radio-controlled planes.

Also, check out the Cape Canaveral launch schedule. While people can see rocket launches from anywhere in Florida, the beaches and clear night sky often provide the best views.

Located about 10 minutes from downtown, the Flagler Museum is where visitors can go to learn about the history of Florida as a tourist destination. I learned that the museum was the home of Henry Flagler, who co-founded Standard Oil. It is housed in Whitehall mansion, which Flagler built for his third wife Mary Lily Kenan. Flagler is credited for making Florida more tourist-friendly through million-dollar construction projects such as the Ponce De Leon Hotel, the Florida East Coast Railway. He eventually gained the nickname as the “Father of Miami.”

The Palm Beach Zoo is a fun family-friendly attraction in the city. The zoo takes up a total of 23-acres, and it houses more than 1,400 animals in a natural tropical habitat. There’s an aquarium, tiger exhibit and reptile house. Visitors also have the option of getting up close and personal with sloths, tortoises or koalas. The zoo hosts many events during the week. It also has daily shows including one with more than 20 bird species.

Those living in the surrounding Palm Beach County know West Palm Beach is the place to go for nightlife. I took the trolley to CityPlace and Clematis Street. CityPlace has several restaurants, shops and a 20-screen movie theatre. A brand-new bowling alley opened in 2013, and the area has a popular karaoke bar called WannaB’s. I even bopped around inside a dance club before listening to live music at a country western bar with an expansive beer menu.

Head to Havana for traditional Cuban food. This restaurant has become a city landmark since it opened in 1993. The menu includes ropa vieja, vaca frita in mojo sauce and tres leches cake for dessert. The best part is their 24/7 take-out window, and I was able to enjoy the delectable cuisine while reading at a nearby park.

Sushi Jo is the top sushi spot in the city. The restaurant has a chic design, and it serves classic dishes as well as their own creations. Try the Anaconda roll, with shrimp tempura, salmon skin, eel, and avocado. Or the Jo’s Crunch, with tempura salmon and eel, asparagus and cream cheese fried in tempura batter.

Rhythm Cafe is a spot made for Instagram. The restaurant has a 1950s drugstore design complete with retro barstools and funky art. Its menu changes often, with past options including a spring roll crepe, onion-crusted fish, and key lime chicken.

Ultimately, I definitely recommend going to West Palm Beach for a vacation if nothing else. It was affordable, exciting, and definitely left me wishing I had more time to explore.