I stood in front of the Memorial Wall, reading the names of the 2,535 Cherokee heads of household identified in the 1835 Census, the Henderson Roll, and then forced into removal along the Trail of Tears. The number of household members was listed too, so in all, of the 16,542 Cherokees identified for removal by the Census, approximately 4,200 perished as a result of the Cherokee Removal in 1838.

According to the Census, these were farmers, mechanics, weavers, spinners, and businessmen.

The Cherokee Removal began in the Southeast United States and in the cities of Chattanooga, Cleveland, Charleston, and Birchwood, Tennessee, you’ll now find memorials dedicated to educating the public about the forced removal of the Cherokee from their ancestral land to make it available for white settlement.

It’s a sobering experience to realize the ethnical cleansing our county partook. These monuments are a reminder of the past so we can move forward into the future without causing similar injustices.

Part of the “Trail of Whispering Giants,” Cherokee Chieftain (above) is a reminder of the area’s heritage. Carved from a single tree by acclaimed sculptor Peter Toth, it stands as a larger-than-life art exhibit on the Museum Center lawn. There are more than 70 Whispering Giant sculptures throughout the world, with one in each of the United States, as well as Canada and Hungary.

The banks of the Hiwassee River were witness to nationally significant history involving the Trail of Tears and the Civil War. It was a pivotal crossing for troop movement in the Civil War. You’ll discover these important stories and more at this recently opened interpretive center, designated by the National Park Service as a certified site on the Trail of Tears National Historic Trail.

The Cherokee people are memorialized in this city park at Ross’s Landing Plaza. You’ll find seven doors that symbolize the seven clans of the Cherokee Nation, and six-foot disks share their history and culture. Look for the Cherokee alphabet on the plaza grounds and the sandstone carved pictures along the upper sides of the Aquarium’s River Journey building. The Passage is a permanent outdoor exhibit, with the symbolism of the seven clans of the Cherokee Nation. There is a ‘weeping wall’ representing the tears shed as the Cherokee were driven from their homes and removed on the Trail of Tears. Seven, six-foot ceramic disks tell the story of the Cherokee Nation from hundreds of years of Native American habitation in the southeast. Seven, 14-foot tall stainless steel sculptures of stickball players will grace the wall facing the river, educating visitors about the game and its importance to Cherokee culture.

During the 1830s when Red Clay was functioning as an important governmental center, the Cherokee had adapted remarkably well to the American culture that surrounded them. At this time, the Cherokee had a government based on a constitution similar to that of the United States, elected officials, written laws, a Supreme Court and law enforcement officers. Some were Christians, many spoke English, they practiced trade, agriculture, and industry much as their American neighbors. Still, they retained much of their own unique culture, which the Interpretive Facility shows within the context of the past.

The American Board of Commissioners for Foreign Missions developed the site originally as a mission within the Cherokee Nation. The property, buildings, and improvements were purchased from John McDonald, the grandfather of Cherokee Chief John Ross. The mission was the principal mission among other, smaller ones within the Cherokee Nation, and served as a training ground for the American Board. At the height of its operation, the mission complex consisted of 50 acres and contained 40 buildings including boarding houses, boys and girls schools and churches, houses, a mill, barns, warehouses, carpenter and blacksmith shops, as well as extensive fields, gardens, and orchards. During removal, the missionaries sympathized with the Cherokee—most missionaries accompanied the Cherokee prior to forced removal on the Trail of Tears. On August 18, 1838, the last church service was held at Brainerd Mission near the cemetery. The mission subsequently closed. Exhibits: One exhibit onsite commemorates Brainerd Mission’s history. 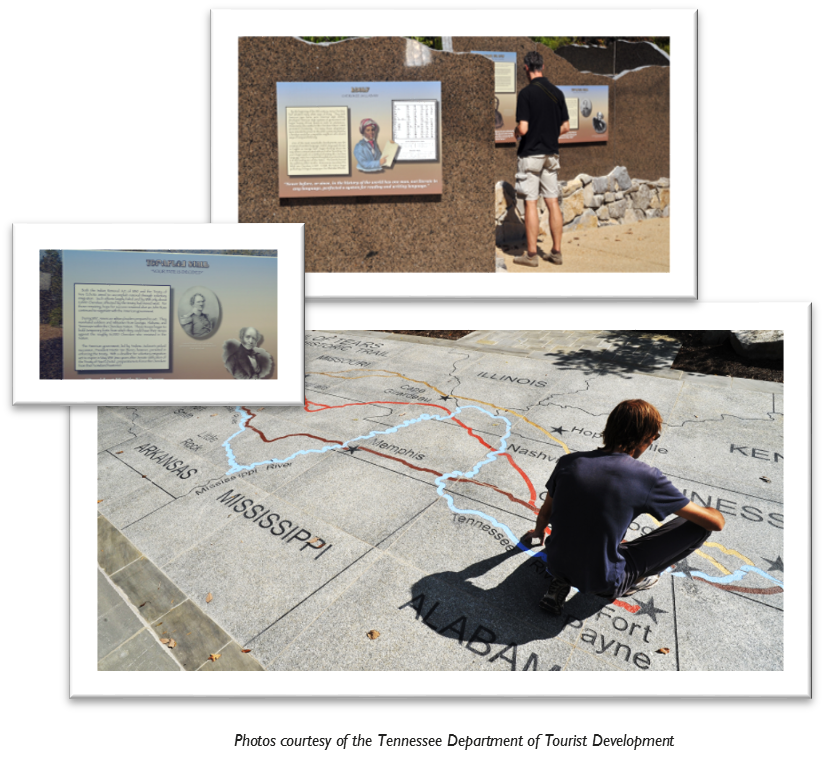 The Cherokee Removal Memorial Park is a multipurpose facility dedicated to those who suffered and died in what has become known as the “Trail of Tears”. The history told here involves the removal of the Five Civilized Tribes from the Southeastern United States to make land available for white settlement. The park is intended to interpret and educate the public about the forced removal of the Cherokees from their ancestral land as well as inform them about the unique wildlife in the area. 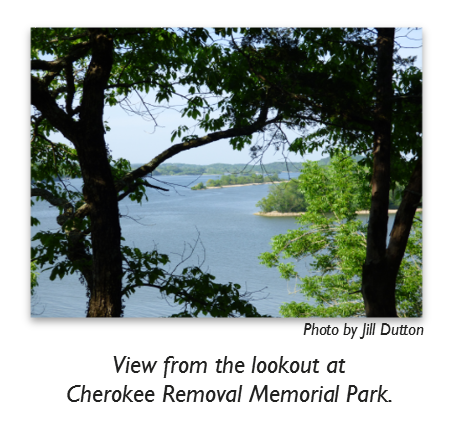 Hair Conrad was a Cherokee leader during the 1820s and 1830s. In 1838, he was selected to lead the first Cherokee detachment, which traveled the main (northern) route from Rattlesnake Springs (near Charleston, TN) to Indian Territory. This 20-foot by 22-foot two-story cabin was built about 1804, and except for the later addition of a kitchen, this log building still looks much as it did during the 30-plus years that Conrad lived here. This is a private residence; normally not open to the public, but a visit can be scheduled by calling Blythewood Farms at (423) 476-8942

→Learn more about the Cherokee Nation at http://www.cherokee.org.

Originally published in the September 2018 edition of Evolving Magazine.